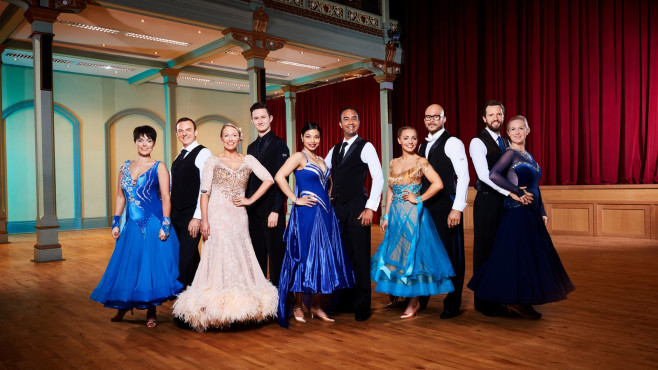 Rushing from the school run to the rumba and Cha Cha Cha’ing in their lunchbreaks, this series takes a unique look at how everyday people juggle work, relationships and family life against the backdrop of the ultracompetitive dance circuit.

Over three months the series follows each pair as they attempt to master six classic routines including Samba, Jive and the Quickstep, and pull together show-stopping outfits to help them catch the judges’ eye. Can practice really make perfect and how will they cope in their efforts to taste sweet success?

The Secret Life of the Ballroom meets 44-year-old Roberta from Brighton, who’s roped in her 18-year-old son, Harry, as her dance partner, and flamboyant Mike from Birmingham, who’s left his husband and beloved dog at home to tread the boards with his best friend, Donna. Near Portsmouth, a pair of award-winning freestyle dancers, Heidi and Deej, think they’re ready for ballroom, only to find it’s not as easy as it looks, while in London young sporty couple, Ben and Laura, take on the competitive challenge as something they can do together. Alongside these are busy consultants Vanessa and Paul from Bristol, who juggle their high-flying work schedules with intense dance training.

This heart-warming series shows how busy lives, already filled with everyday challenges are turned upside down as the world of dance becomes all-consuming, testing relationships and changing their lives forever.

W is UKTV’s premium entertainment channel, offering audiences a dazzling mix of UKTV original series; Dr Christian Will See You Now, John Bishop: In Conversation With…, The Davina Hour, The Secrets In My Family, Inside the Ambulance alongside handpicked gems from the BBC and Channel 4 including series from Louis Theroux, David Beckham, Stacey Dooley as well as the same day repeat of EastEnders.

UKTV is a commercial broadcaster reaching over 41m viewers every month.

The award-winning independent has eleven imaginative brands – UKTV Play, Dave, W, Gold, Alibi, Yesterday, Drama, Really, Home, Eden and Good Food. These include the two most popular non-PSB channels in the UK and account for nearly 10% of the British commercial TV market. The company’s most recent financial results showed record-breaking year-end revenue of £344.8m and EBITDA of £91.3m. It invested £151.2m in programming and related launches last year, and is a significant investor in British creativity.

Now celebrating over 20 years at the forefront of digital television, UKTV – an independent commercial joint venture between BBC Worldwide and Scripps Networks Interactive, Inc. (SNI) – is proud to be the first British television broadcaster in The Sunday Times top 100 companies list.